I’ve seen several posts asking for videos of A24 performance from users that document kills, strikes caused by interference, and kills removed by scavengers. you can find a video showing all of those events in this article that I wrote: https://towardsdatascience.com/improving-the-world-for-birds-3ab0ecbdbe21?sk=c6178a80fbd03586d0e32365c041ef03

Sam, this is excellent work.

FYI that reporting is available off the shelf in Trap.nz, the monthly totals chart will give you same thing (unless I’ve missed something?):

For interest, the graph here is for live capture with daily lure and remote monitoring. There was a clear spike in ferret numbers in August, followed by a very clear spike in hedgehog numbers in Sept. Note the hedgehog spike matches the end of their known hibernation period.

Perhaps interesting to also note the ferret spike is in mid/late winter which is said to be the hardest time to catch them.

The terrain is pasture/bush block, not far to the South of Huia.

Andy, hedgehogs don’t hibernate around Auckland do they? I thought they only did that in colder places like the South Island?

I’m in Titirangi and I’ve done quite a lot of filming around my house with trail cameras and with the Cacophony thermal cameras. I really agree with your first major point: That it’s only possible to see what’s going on with cameras. Things like why predators aren’t being caught, what animals are triggering traps and so on.

My YouTube channel is here: https://www.youtube.com/channel/UCsBeRXHuHWwaVvpLXQc335g/videos. I don’t really upload videos any more, I’m not really seeing anything I haven’t seen before.

Here at STNN though, we have 4 trail cameras covering some grey faced petrel burrows which we look at each week. Just to keep an eye on them, and see what predators are around. Same old things year in year out. Rats, mice, hedgehogs, dogs, cats and the odd mustelid.

@davidnblake36 Don’t know. But it’s a bang on match to the traditional hedgehog hibernation period. This is all from the traps I showed you, lured daily, active 365 days of the year, all species, and cleared (reported) the day they have a capture. The trap and lure was a constant, the only change is the date (weather) and the number of animals caught.

The graph is just one of a number of projects in the area using these traps, they all saw the same pattern: 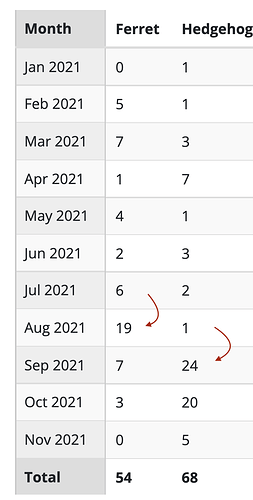 Right, ok, cool. Looks like they do hibernate, or at least slow right down in their movements.