Hi, I have a trap line set up and have now shifted 6 of the traps to a better position. I don’t want to delete the whole line, only to drag a part of it out wider to the new trap positions. Please advise how to do this.

Select your line. Hit the edit tab and then tap the edit tool button on the map (third button from left at bottom of map). Then move cursor to the line (which should be highlighted) and hit that. Line should change colour and by moving cursor along it a black circle shouls appear at the point you want to drag the line to a new location.

@ Makara_Peak is right, here’s a screenshot: 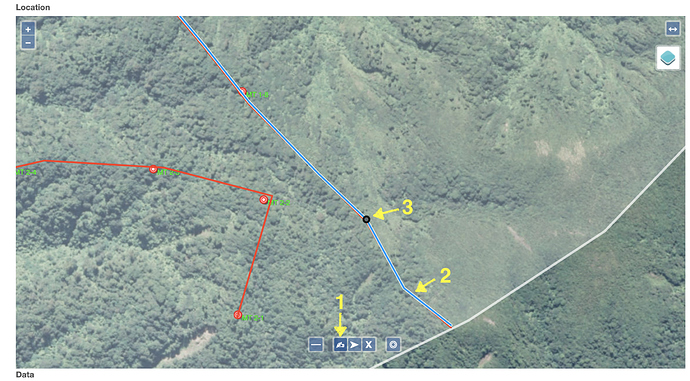 Thank you for the help

Thanks for explanation, done now.

Can you delete part of a line? change the extent of a line and continue it in another direction… How do you delete all of a line to start again? And what happens to the bait stations that were allocated to it? Can they be reassigned to a new line name in one easy step?

Yes in the same way described above using the edit function. Although sometimes it is quicker to start again. Use the Clear feature tool (a cross) to remove an entire drawn line. You can then redraw. If you do this in Line edit function the line still exists, just no line is drawn so all the stations will stay associated with that named line whether or not you have drawn a line. You can however reassign stations to a new line in bulk using the Manage Bait Stations button or just change the line name in the Line edit function. Hope that makes sense! Andrew

Terrific, thanks Andrew. I discovered the problem was that the line didn’t actually disappear until I saved - I had been expecting it to disappear from the map after using the cross. Now I’d like to know where the ‘manage bait stations’ button is. Under ‘Bait stations’ I only have the option to either add a new bait station or add data. I’m bamboozled! Can I suggest that editing tips and explanations are added to the tutorial pdf to help other newbies like myself? Gratefully, Sharon