Anyone had success Eggsellent and blue Smooth Lures

Has anyone used the Eggsellent or Smooth Lure products (by Connovation)? Have they worked for you?
Cheers
Cam

Cant speak for Eggsellent but smooth in a tube works really well. Would recommend for possums/rats.

Kia ora Cam the legend!
Smooth in a tube (formerly known as Ferafeed219) is terrific for possums.
If I encounter lots of rodent bait thieves, it also goes into adjacent rat traps to protect my possum bait. That does however encourage possums to interfere with my rat trap boxes. Thats how good that stuff is.
Most guys I know use FF219 in conjuction with cyanara/trappers cyanide.
Have used eggsellent as alternate for FF219/213/913, but FF219/icing sugar + flour are my first pick for possum control.
Also one beauty feature of FF219 is its pest presence indication. Easy to tell if it was possums or rodents taking the prefeed as they have distinct tongue markings to distinguish them.
Nga mihi nui, e pai to rā

I get that it is convenient having it in a tube, but is it more desirable to a possum than apple and cinnamon? We’ve just got 2 Timms traps on the farm, but I find they’re often not interested with a very low catch rate. Shooting is far more effective for us, but if Smooth in a tube is really irressitable, then hopefully we can up the Timms catch rate. I’m ordered some, so I’ll test it out as soon as I can. Thanks for the comments.

Hi Cam, I’ve tried two tubes of eggsellent for mustelids and rats at Waipahihi, didn’t persevere with it as it seemed to lure blackbirds into DOC200 traps during spring. However the flexible bottles are tough and are good for peanut oil and peanut butter brews for rats, where we are. We are getting mustelids on occasion in the DOC200 boxes as they follow the rats in. Helped by real eggs and eraze lures.

Kia ora Cam,
Trapping affects your pest gene pool by selection and adaption.
Your apple and cinnamon has removed all those possums interested in it. That is selection.
Others may have had a try and didnt like it, ignoring apple and cinnamon in the future. That is adaption.
As trappers we need to exploit the target species weaknesses. For possums it is lazyness and curiosity.
If apples dont work anymore, try any other fruit that is in season at that time and gets hammered. Pears, citrus, whatever suits. Local possums may have different palate, just ask nearby landowners with orchards what is the locals’ possum flavour of the week.
Thats where I shift my ramps with contingency traps to.
Also, after some time, you will encounter trapshy animals.
My take on this:
Use VTA initially to knock down the bulk.
Trap the remaining ones (aka the poison shy).
Spotlight/shoot the trapshy.
Trap the spotlightshy.
Then repeat the cycle.

Smooth in a tube (SIAT) has a cinnamon smell, but also a different texture and colour.
If you have access to SA2s or SA3s, throw them into the mix, they are better suited for paste baits/lures. Fruit are possible, but it is important to check the trigger is not obstructed.

But you are spot on, trapping alone does not address the pest issue long term. Small bore rifles have their place.

Btw, awesome mahi that you do!
Nga mihi nui,
Martin

Smooth is excellent, but mix it up. Unless you’re checking your traps weekly then our experience has been that smooth (or possum dough) are more effective because they last a lot longer, even months. We can also get multiple kills out of a single dose of smooth (or p/dough.)

Remember that possums often walk past traps many times over many nights before showing interest, if the baits are going bad in that time you’ll miss them.

For landowners with limited time, idle traps (bait gone bad) is a much bigger issue, not so much for contractors who regularly service them. 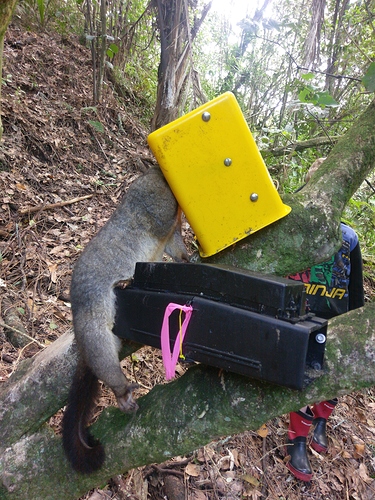 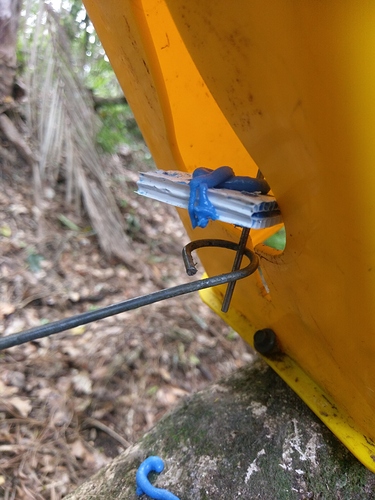 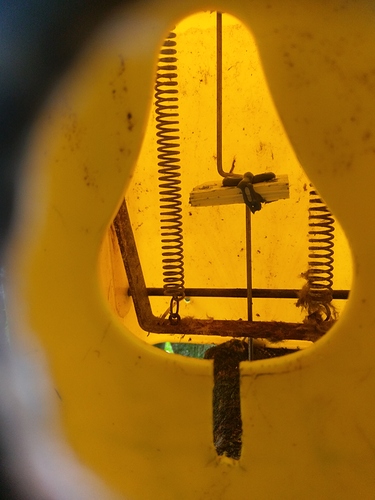 Thanks for the pics and comments Andy. My Smooth arrived yesterday, so I put some out in front of a camera to see what might be interested. I was surprised that it doesn’t have a strong smell to a human, but perhaps strong smells are off-putting to those with sensitive sense of smell.
Do rabbits like it? I didn’t quite catch it in action as the video segment stopped right before they touched the lure, but I think a rabbit may have eaten the lure. Not that it’s a problem, but I was surprised. No possums came buy that area, so can’t comment on that. I’ll see what the rats make of it too. Cheers, Cam

A rabbit was into the Smooth again last night. 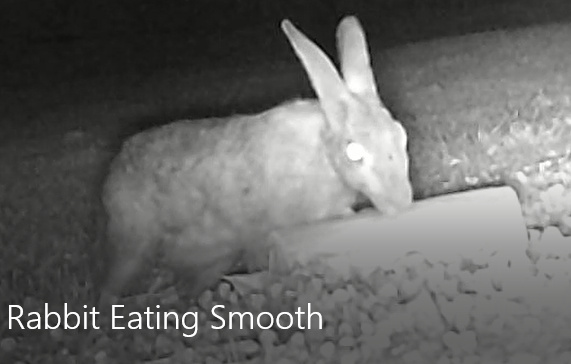 I can check my traps most days, so longevity is less of at issue, but rebaiting traps can be time consuming.

You’ve reminded me I need to modify my Timms traps as in your last pic too. I still need to make a bite block, so I haven’t tried the Smooth in the trap yet. Cheers

Hi Cam, i have had load of catches with Timms / apple&cinnamon, but had one particular possum on camera for 2 months and couldn’t catch it. The Possum Control / OSPRI team put up a Possum Master trap with possum dough as lure and caught one on the second night and the other elusive one within a week (if that is any help!).

Useful photos Andy - is that bite block made from a chew card?

Hi Tony - thanks for your comments. I find apple and cinnamon pretty good, although doing that next to the apple tree might be a bit ambitious. The first night a possum came by and ate the Smooth lure, although doesn’t seem like a strong attractant as they had to be close to find it. The next night I put out a platter of smooth and Goodnature possum lure. A possum smelt both and continued on. I haven’t had any success with the Goodnature lure, so not sure how that passed testing and I don’t recommend it. Maybe that smell put the possum off th Smooth next to it. Or maybe they’re fickle…

I see the possum master doesn’t pass the humane kill test here, but Timms actually failed too. https://www.landcareresearch.co.nz/science/plants-animals-fungi/animals/vertebrate-pests/traps/traps-tested I find they don’t like putting their head in a tight hole, so any traps with a wider opening might be preferred. Sentinel passed and looks similar to Possum Master. I have never tried possum dough, so I might add that to my shopping list.

In this case it would probably be easier for me to go out and shoot the damn thing, but he’s an interesting test case in the meantime.

You can make those plastic bite blocks from old real estate or election signs too.

I caught a possum (and joey) last night with Smooth in corrugated cardboard (until i get a better bite block) in the Timms, so it could be a winner. The possums by the apple tree are still trap shy. I think a trap with a cage type entrance would be better so they can see around them when they put their head in. a bit like the AT220, but without the price tag!

These one’s I made from old political party hoardings to be precise, so yes it’s corflute the same material as chew cards. Plenty of the stuff around, real estate signs etc. I made a few hundred one afternoon and give them away with the lure. Since putting those pictures up I’ve caught three from the same bite block in the nearest trap to our house, without actually re-baiting it, massive time saver (and apple) !!! 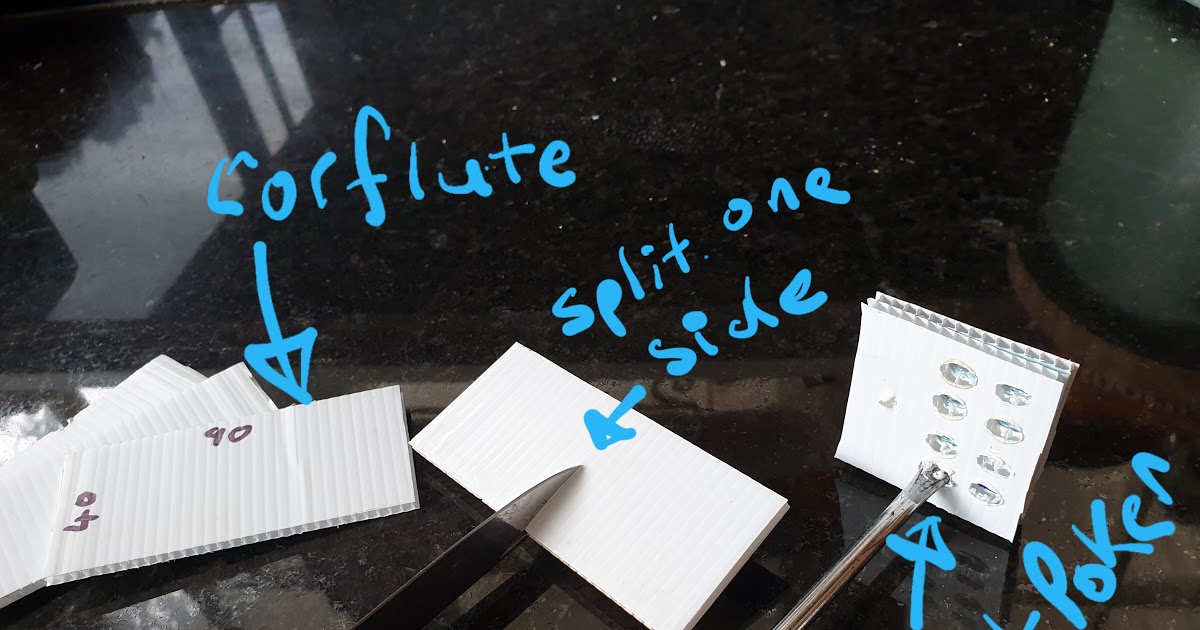 That is a hare not a rabbit.

True - I don’t think I can change it. Rabbits were there too, but the image is a hare.