Enticing rats out of trees

Hi, has anyone had any luck with getting ship rats to be enticed to bait boxes on the ground? I tried installing D-Rat tree/branch mounted rat traps but the rats are very shy and after a year I had not caught anything in any of them. Even during the day I can see large rats running amongst the branches of our Puriri trees. The other night I went out with a flashlight, shone it into the tree and probably half a dozen possums scurried sway and amongst them were at least 3 or 4 rats. I get the odd rat in my trap tunnels but most nights the possums knock the traps over trying to work out how to get to the peanut butter.

Do you know what species of rat they are? I’ve had the most success trapping ship rats in the trees using a typical Victor trap box and adding a balcony on the front so they can drop down onto the balcony and enter the trap. sounds like you may have any issues though. I find Norway rats a lot hard to catch, but shippies were a doddle to be honest. I primarily use the Goodnature Rat & Mouse lure (Chocolate - the ants don’t usually eat it, unlike Nutella). I put some on the outside so they know what they’ll get on the inside. I’ve also used almonds (with a hole drilled in it) in the traps with the little hook tabs of the other Victor traps and that worked well too. 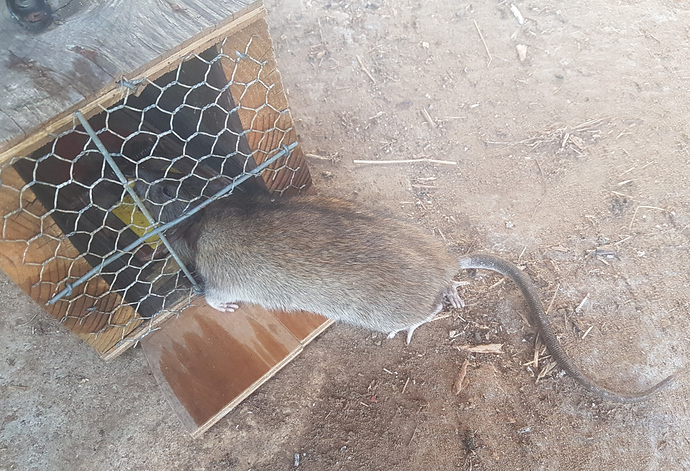 I have a few traps on a cord, but mostly I balance them on the branches. 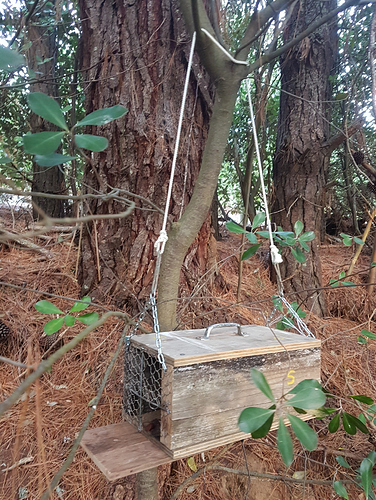 The rats seem more comfortable in the trees away from cats. I rarely catch any on the ground, except Norways. I used meat to catch Norway rats. Cooked chicken scraps are a treat!
I didn’t have must luck with tree mounted traps, but they should work.

You need to take a rifle to those pesky possums! Maybe some rat/bird-shot for the rats too!

Thanks Cam, some good ideas there. They are ship rats from what I can tell. I managed to get around 45 in the last year using a combination of K’ness rat traps in box tunnels and a DOC200 box but it seems they are reluctant to enter traps now. They eat my bait in my Trapinator possum traps a lot also. Have got 10 possums in just the last week after a hiatus of about 6 months post covid lockdown where they stopped getting trapped for some reason. I do have an air-rifle but I am very close to my neighbours houses so I am a bit hesitant to use it much.
Matt

I hear ya RE the gun. I use a 22 as they can be tough bugger to kill and aiming a rifle close up with a scope set for rabbits at 40m isn’t easy. Keep up the good work!