We purchased a couple of these traps months back, and they don’t seem to be performing all that well.

I think it might the design of the box, as it uses a small black down pipe for the entrance.

Just wondering if you have used them and what success you have had, in the few months we have had them I have caught one Rat and one Ferret.

Rat Tunnels nearby have caught over 40 rats in the same period.

I’m think I could take the DOC200 traps out of the box and create a normal Tunnel style setup?

Keen to hear if you have had similar success or are we doing something wrong?

I recently bought two of the BT 200 (without box), and can confirm they have two holes in the base where screws go through to fasten the trap to the base of the box, so a simple exercise to remove them if you wanted.

The tube does seem to create a situation where the animal does not see "light at the end of the tunnel’ which which looks to be an unique design.
The PCR (Pest Control Research) guys do seem to have an evidence based approach to what they do (see the product testing report on that page you linked) so their reasons for this layout would be interesting to hear.

I’m fairly new to trapping, but have been reading heaps of info-
Three things I would try before complete re-boxing of the trap are

Thanks so much for the great feedback.

I have tried the dirt idea, if I have no luck I think I will close the hole and create a hole in the mesh.

Its been pretty stormy here, so I don’t think much is moving at nights here.

For around 2 weeks I have my self-built BT200 box 2m from the location where I came eye to eye with a stoat without any success.
I have tried whole egg, as well as fresh mouse which… became available

So far no dice, but must say the challenge of outwitting these sneaky plunderers is a bit fun.
I have some Eraze E3 rabbit paste, Mk6 Fenn Traps and Trail-cams on order so its only just beginning, I’ll be sure to share any success I have.

If you need a morale-boost, I spotted an image of the PCR-built trap box here with a kill!

Yep caught a Ferret in Feb ago with dried Rabbit, also have caught one Rat. Since then nothing at all.

Here is one and only Ferret with caught: 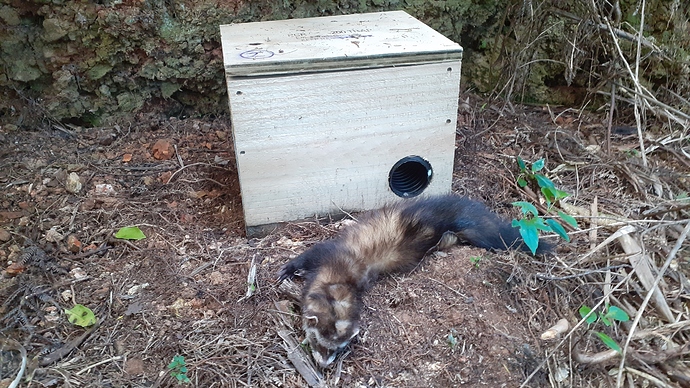 Hi Gary,
I haven’t used that type of box. Looks like they have skimped on wood & wire. I use the bare Doc 200 traps from CMI Springs & build my own boxes to their design. It is a straight through tunnel with 19mm wire mesh over each end, with a small ante chamber on one end. The rats can see straight through. I did not put wire on the outside opening of the ant chamber as i don’t have ground dwelling native birds to worry about. Because I did not secure the corners of the opening hole in the ante chamber, hedgehogs have been able to push them aside to get their heads in. Works a treat. I have caught 24 hedgehogs in 3 1/2 years along with 168 rats using 3 Doc 200 traps. For bait I use peanut butter & nutella side by side. To make the peanut butter last longer before it goes mouldy I crush 10 chewable vitamin C tablets & mix it in a jar of peanut butter.
Cheers,
Ron

Thanks for posting Greenglass,

That is an interesting idea about the vitamin C tablets, I do find Peanut butter lasts around five days normally. Better now that temperature is dropping.

I will give that a go and see if it works.

Yes I think I will make a trap box and see if that improves things, still nothing in the traps. But the trap tunnels are all busy.