Goodnature vs sentinel and Timms

I’ve had 2 Goodnature traps for about 10 years and have only ever caught 2 possums with them whilst I’ve caught dozens with Timms and sentinel traps. I’ve put hunting cameras with both sentinel and goodnature next to each other sentinel attracts possums Goodnature ignored. In another site recently I seen multiple possums sniffing the Goodnature bait but never setting it off some sit on top of the trap and paper to dance on it! See picture note. I’ve been in touch with the company and tried all their suggestions to no avail. Anyone had success with Goodnature traps or similar experiences to mine 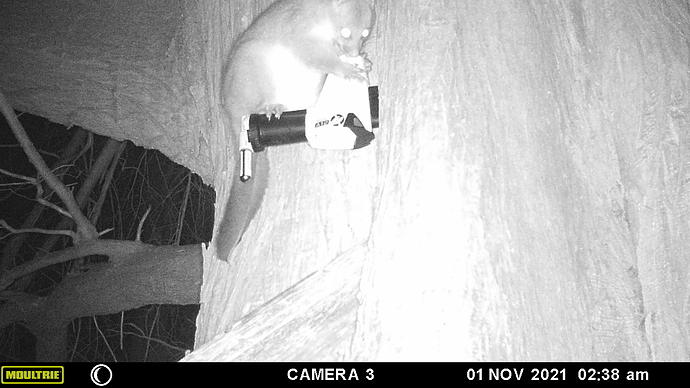 And here’s another Possum sniffing the trap seen on multiple nights with his friend. I’ve caught one of them in a sentinel put on an adjacent tree, waiting to get the friend 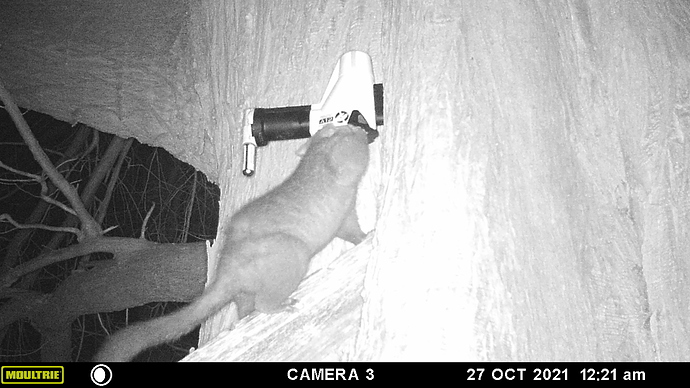 I don’t rate goodnature traps, great marketing but a not so great product.

I’ve had exactly the same experience as seigners using the Goodnature A12 trap for possums. And that includes several years using trail cameras observing their disinclination to put their head into the orifice. And I’ve never come across anyone other than Goodnature employees who have a good word about that trap.

I understand Goodnature have discontinued that product

I’ve trapped several possums recently in my A12, while my Timms haven’t trapped a thing for a while. Remember that you have to refresh the bait cup now and again, by removing it and giving it a good tap to put more lure into the bite bar.

Do you give them samples? I think that this would make a big difference. I put a dab right at ground level and another one about 10cm below the entrance.

I hope this makes a difference. Good luck!

I’ve trapped a few rats with the Possum lure, which I tried on a whim, so it might be worthwhile seeing if your rodents are also fans of it.

We have had about 80 kills of possums in last 14 months on Goodnature A12s. We install them on smaller trees [less than 30 cm in diameter] at about eye level above ground. Because we are trapping an area of 68 ha. they are more convenient because we don’t have to check them as often as our Timms and DOC 200s. We check them on average about every 10 days and always check the bait. Also after about 3 months the bait loses its potency so we replace.

Thanks I’ve tried this to no avail. Here is the latest Sentinel kill right next to the Goodnature trap. Sentinel trap has been in place 2 weeks, Goodnature 4 weeks. 1-0 to Sentinel with my camera showing at least one more possum sniffing around ready to be trapped 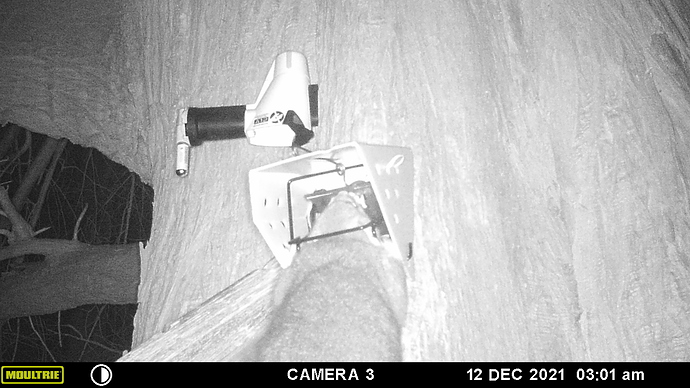 I admire those of you who are posting and have had success with A12s. I may try removing mine from the possum’s favourite tree and putting on a smaller tree a long way away … Possum numbers are currently very low here after the last Ospri visit at beginning of 2020 so experimentation can be difficult!

All I can say is that I moved my A12 around to different trees several times during the three years (and three different traps provided by Goodnature after my complaints about lack of success) with no improvement. After seeing two videos showing possums putting their head into the trap without it firing I checked the trap the next morning and the trap fired okay. I assumed that the possums were just licking the lure, rather than biting the bait block and pulling it down to fire the trap.

There’s no doubt the lure was effective - I saw the possums removing all the spots I’d put on the tree below the trap by early evening. It’s just they were reluctant to go into the trap.

I also complained to Goodnature as the original traps kept losing their charge, they replaced my 2 traps last year at cost price (still not cheap). I’ve caught nothing in them whilst catching many in Timms and Sentinels. I’ve had cameras looking at the traps. Initially thee was no interest at all in Goodnature as 2 Sentinel traps on the trees about 3m away caught possums regularly. In the new site Possums are investigating the GN trap including sitting on top licking the CO2 cannister but just not activating it as in the photos. I regularly test the charge and try fresh bait.
I wonder if it is the enclosed space they need to put their head into that put’s them off.

I find adding a blaze of flour lure helps, but if the numbers are low then we don’t capture many in the A12. I find timms traps or leg hold much better for possums.

The fact that GoodNature have Discontinued the A12, says a lot doesn’t it?

Yeah I think very few people have success with these. I’ve also filmed them investigating the traps but not getting caught.

Mind you, I’ve had quite a lot of success with the AT220 trap which involves the possum entering vertically upwards. But that trap isn’t quite as claustrophobic as the Goodnature A12

I bought an A12 in April 2020 and monitored it with a trail-cam set to video (I have heaps of very interesting footage), the possums weren’t too interested until I used peanut butter with cinnamon and a few drops of aniseed. This had been very successful on other trap types
I cleaned the Good Nature bait from the bite block before zig-zagging string through its openings and tying the ends in a knot before smearing it with the peanut butter mix. Then I used a file to enlarge the rectangular hole in the A12 that it mounts into so the that the block and string would fit through.
I had to jam the mount with a knife whenever I’d applied fresh bait to the bite block to prevent the trap firing when I replaced the bottle.
I’d put a couple of bait blobs on the tree trunk and smear a bit in the mouth of the trap.
This proved to be very successful, the possums liked the bait, the string prevented them from licking it off and I believe that their teeth would catch in the string which would make sure the trap fired, the string would need replacing after a while as it would be cut to pieces
This trap mounted on a pine tree less that 50m from my urban Dunedin backyard killed 24 possums over about 7 months, often two a night and when we went on holiday it just kept working and I came back to 5 possums at the bottom of the tree. The smell of the first possum pretty much guarantees that any subsequent visitors will stick their heads into the trap.
Sadly it started to leak CO2 and would kill 1 or 2 on a new cartridge before just giving the next ones a fright.
GoodNature were happy to replace the trap but the next one only killed 5 and then lost pressure.
A12 number 3 killed 8 and then started leaking down quite quickly.
Trap 4 killed 2 and stunned the next 2, at this point I sadly decided that it had to be taken out of service.
They are brilliant when functioning properly but tend to be temperamental.
Between the original and 3 replacement traps mounted on this tree there were 39 definite kills over about 15 months but I have no idea whether any of the possums that staggered/walked/ran away died or recovered.

The people at GoodNature were great to deal with and replaced the traps without question.
I’ve had an A24 mounted at the base of the same tree and it has killed a lot of rats, hedgehogs and even a mouse or two.

I’m using a Flipping Timmy on the tree now, it works well but I miss the A12.

I also have video of possums extricating themselves from both Sentinel and Trapinator traps, the one in the Sentinel climbed back up the tree and finished off the bait on the sprung trap.