I am new here and have just begun entering data for several lines of traps. I have been doing so by going to Traps/Add Catches. I then enter the line, date, then, because we mostly get rats, I enter species as rats and bait type peanut butter. I then unselect all the resulting lines and then tick the ones where we had catches and change the species or bait type if that is appropriate.
However I realise that this does not record that any trap that does not have a catch was serviced and rebaited. If I select any of the traps where there was no catch, it will increment the catch number field.
My reporting shows those traps as not being serviced when they actually have been.
Thanks
Peter

It sounds like you’re most of the way there. Instead of applying “Species: Rat” and “Bait type: peanut butter” as default values to all of your traps on that line, apply the most common value. E.g. perhaps most of your traps have not caught anything, and the bait is still OK so they weren’t rebaited, in which case apply “Status: Still set, bait OK” as the default value for your traps. Then don’t deselect any of the results, but update any traps that differ from your default.

Here’s a screenshot example of what I mean. I’ve applied the default Status value for each trap as “Still set, bait OK”, then updated only the second trap down, T002, with the information for a rat catch. Once all the info is entered, you can hit the green “Save” button at the bottom of the page. 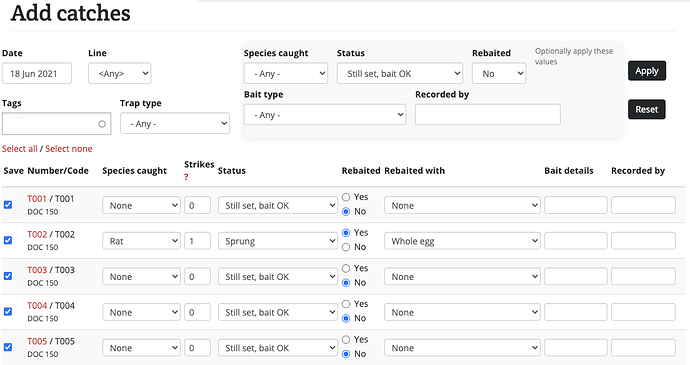 I think the effect of those features blends in with the filters too much and “Optionally apply these values” is not clear enough, its seems like a lot of new users miss it.
Edit: Picture 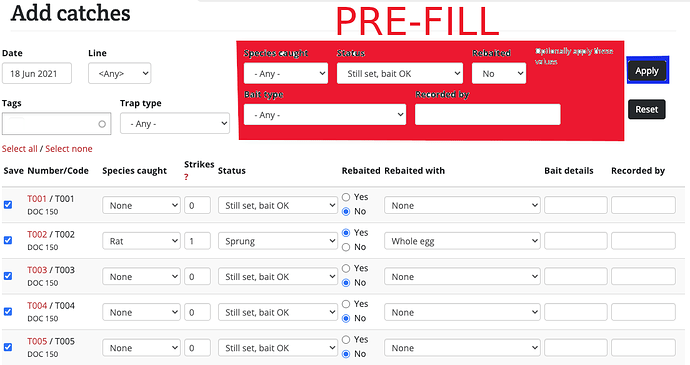 Thank you for your replies. I think I see what happens now. It’s the act of entering a species that increments the quantity. If you leave that as “none” then it doesn’t increase the value. I had assumes that simply recording a “catch” would increment the value. OK, I’ll work around that. Usually we replace the bait on all traps. Our site is quite damp and 99 times out of 100 it is moldy when we service the traps. “Still set Bait Bad” would be the best option for us.
I am taking over recording from someone who set this all up before and I notice it has been set up with a supplementary trap in the case where the trap is a double. So, in the rare case of two different species is caught in each trap it can be recorded in the supplementary trap. Just wondering if anyone has a better way of recording that.
Cheers Peter

Oh, If by chance you are referring to the Strikes column - I believe it relates to the “Goodnature Traps” and enables users to keep track of when the gas will run out, I just ignore it for my snap traps.

Great point Maybe_It_s_a_Trap, I agree and will add this to our usability review.

Sounds like you’ve got the trap records workflow sorted, I hope you have an easeful time with it going forward.

With double traps, you may prefer to have each trap as its own separate trap, both at the same location.

It is easiest to create a colocated installation on the app:

If you want to do this on the website, you will need to copy and paste the longitude and latitude coordinates from the original trap, and paste them into the ‘Manual coordinates’ field when you’re setting up the second trap.