I thought I had found a bug, but i figured out what to do so it’s more of a usability/idiot user problem.
When you select the layers icon at the right of the map to turn layers on and off its hard to dismiss the panel.
Intuitively I tried to press the hamburger icon at the top left of the screen that calls up the app settings, I also tried clicking on the map that still shows at the left of the panel. In the end I quit the app and reopened it only to find that the layers panel was still visible when the app launched. It was at this moment I finally noticed the little black arrow at the upper left of the panel which when pressed will slide the panel back out of the way.
It’s not broken, I just found it hard to spot - I think my eye brushed past it because it looks like it’s a map control from behind the panel. Intuitively I expect to dismiss the panel by pressing the same button I used to call it up or find a control that looks like it’s on or part of the panel. I think if that arrow to the left of the panel was made to look like it was inside the border of the panel or a “tab” the same colour as the panel like on a paper filing divider it would have caught my eye sooner. 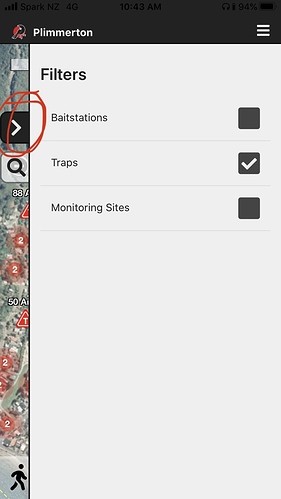