I’ve encountered a couple of bugs while investigating the Monitoring section to evaluate it for uploading our camera data.

If you could let me know when these bugs are fixed that would be great - we have 50+ cameras, being checked regularly and all images identified. Over 2 years this is 300,000+ detection events so I’m wanting to be sure the system can handle the data appropriately for us.

Just another user here, but I have had a play with importing data feature.
Does your browser load a box with a blue background when you visit this link? https://trap.nz/import/import_monitoring_records

The list of species is in there, but I’ll include them below just in case you have a browser issue:

Thanks so much for the list - it’s good to know.

Yes I get the blue box with the field criteria, but there is no list of Species values allowed - maybe it is a browser issue, I use firefox but I’ll try it with Chrome.

I’ve had a look into your issues.

Thanks so much for that info - it helps a great deal. So we have 53 cameras onsite, we manually identify the species captured in each image and record these data to monitor predator abundance. If the TRAP.NZ ‘camera’ monitoring station can only record images - what should we be using instead to record these data?

The Camera stations don’t use the “Add Data” workflow that other Monitoring Stations use on the website, as they record different data. As well as a photograph, you can select which Species you’ve ID’ed, as well as a few other options, before saving that record.

The Camera Monitoring Stations feature is a new one - it hasn’t been “officially” released (though the functionality exists on the app and the website) - so we’re still figuring out what data accompanies a record, and how to collect that in the app and the website. If you have any ideas on what other data would be useful for your group to record against your camera stations, feel free to let us know!

Kia ora Sarah, I’ve been trying to use the camera upload feature today and I am getting stuck at the upload part. I have left it for over half an hour to do one image, my colleague at a different site is experience this same issue. What should I expect to happen after the upload process? For reference this is what I’m seeing on the page. Cheers. 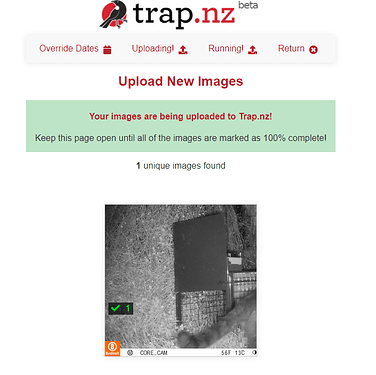 Thanks for bringing this to our attention. I have let the dev team know about this. They are going to redirect a user back to their camera page with the new photo record attached, once it is finished uploading.

At the moment the records are being saved once they are uploaded, so once that green tick appears on the image (as shown in your screenshot), you can navigate to your camera and see the new record in the list.

A redirect back to the camera page will be great. I have to say though, I’m not certain my record is uploaded, as when I go back to that camera page I don’t see any records. And searching in the monitoring report doesn’t produce any results.