Can we please add the new Good Nature Lures 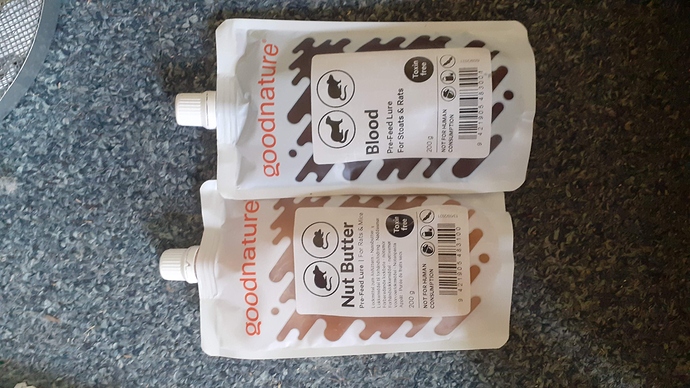 Let us know how well they attract predators, they look like the blood would be good

Yep so far, nothing to report across all our traps, will keep you informed

These two lures have been added to our list

I hope your pests are as fond of the stuff as mine have been.

Don’t forget to do a prefeed - it pays off. I put some on each side of the trap box and objects nearby, like a rock, or tree trunk. FYI, you won’t be able to smell the stoat lure - I e-mailed Goodnature about is, thinking that I had a bad batch.

I recently discovered that a very good way to kill the pests, especially mice, that have been stealing the bait out of my snap traps. Firmly squeeze a piece of Erayz preserved rabbit into the bait cup (you’ll need to use a knife to cut it to size). It’s texture is too firm for them to eat it at the trap, so they try to remove some, creating enough movement that they set off the trap. I’ve trapped 5 mice in 2 weeks doing this, and smoked rabbit is an excellent bait for rodents and mustelid. I’m going to mount a few mouse traps inside my DOC boxes to try and kill more of them. Studies have found that female stoats and weasels are very fond of mice, so use any that you kill as bait in a large trap.

I recommended the lure to Wak_Trapper a few months ago.

It’s worked very well for me. I’ve trapped at least 50 rats using it in black snap traps, of both species, and quite a few mice, too. It’s been one of the lures I’ve used in traps that I’ve killed mustelids in, along with normal baits. It’s a great long-lasting lure, if you aren’t able to check your traps that often. It’s also really cost-effective, because you only need to use a small amount of it per trap and it doesn’t go stale or rot. A smear of it on the outside of a Timms trap is a good way of catching the attention of feral cats, too.

It looks great when it’s spread on a DOC trap’s treadle, because it has the glisten of drying blood, and it has a lot of surface area to release its scent. Just remember to use the safety clip when applying it!

Thanks for the information.

What is the baits lasting with wet conditions and insects. Ive found peanut goes quite quickly where I am front ants, insects and slugs and wondering the blood being a liquid lure if it would be the same.

Yes I place a stick near the entrance with the Lure on it, seems to bring them into the tunnels.

Its only been a couple of weeks, so far they are lasting in the bush. We are in Waitakere Ranges and we get lots of rain.

PB was lasting about five days, so I will keep you posted.

Also have noticed Ants not interested in the Blood or Nut Butter Lures, maybe they have less sugar in them than Peanut butter.

I’ve been using Stoat lure for years, but I haven’t seen any sign of insects or invertebrates eating it, and the insect populations here are large and diverse. Blowflies and wasps show no interest in it, so it’s a great thing to use instead of meat when it’s wasp season.

Unfortunately, I do catch the occasional blackbird or songthrush with Stoat lure, but I have never trapped a native bird using it. I’m sticking with Stoat lure, because it has worked so well for me for mice and both rat species, and I’m in mustelid country. In the city, rotating the Goodnature lures every few months, plus PB, should be very effective, but pets might like Stoat lure. If you have a shed or garage that cats and dogs can’t get into, I highly recommend using Stoat lure it in snap traps. I killed 50 rats last year and a handful or mice in 1 old shed here, mainly with Stoat lure. It’s economical, too, because you only need to put a small amount in the bait cup.

We’ve had some rain recently, too, but there are enough mice around that the prefeed doesn’t last long enough for me to gauge how well it holds out in the rain! If you can check up on your lure in the bush after 6 months to see how well it’s lasted, you’re living on a pest-free island!

I haven’t had the Stoat or Chocolate lure eaten by anything but animals. They might use an artifical sweetener that animals can taste that either repels insects or that they can’t detect. Early on, I bet they realized that if they used sugar, they’d have insects, lizards, and birds sampling the lures. Somehow, they solved a big problem.

Insects and animal love PB because it’s such a concentrated source of fat and protein, so I’m not sure how big a role its sugar content plays. It’s a bonus, not the main attractant. I would be surprised if ants and rodents didn’t prefer the PB with added sugar, but they might just eat the first kind they encounter. If you have both kinds of PB, you should run a quick experiment. Put 2 blobs in a trap next to each other and see which one is preferred. Sugar should help preserve PB a bit longer in the field, so that might be the kind to go with, anyways, and it’s cheaper!