Hi
I am running a large project in Mahurangi West. A few of our trappers have complained about apple (Fresh)completely missing from Timms & Flipping timmys and traps still set.
They seem to be using reasonably sized wedges/chunks of apple
Any thoughts or ideas would be much appreciated

It’s possible that rats have been eating the bait. They make numerous trips, nibbling it until it falls off of the spike. Then, they either eat what’s left under the Timms, or take it away. I used to find nibbled apples in my traps all the time until I changed things.

A mistake that I’d been making for years was to use a piece of apple that was too big, usually half an apple on my Timms. These were usually too big for possums to get a good bite, so the apple would spin away. A rectangular piece that’s about 50mmx30mm has worked, and skewer the bait horizontally. Don’t put in the core of the apple, because the seeds prevent it from skewering well, and this prevents seeds being eaten. This technique makes an apple go a long distance, too, saving a bit of money over the long haul. It’s easier to dice an apply into bait when you use a really big apple.

Next, give the apple chunks a dusting of cinnamon, which rats dislike, but possums are really fond of. The cinnamon keeps birds, insects, and invertebrates away, because they can’t detect the sugar that the apples contain. I put pieces of apple in a sealed plastic container, sprinkle in some cinnamon, and give the container a good shake, which gives every surface a light coating.

The cinnamon seals in moisture that would be lost without a coating, so the apples stay firm longer. This is especially important during hot, dry weather, when apples can shrivel up in no time. I have trapped a few possums with a shrivelled-up apple, but it’s rare.

If this won’t work large-scale, and apples can’t be coated with cinnamon, you could try placing rat traps close to your Timms. You’ll get some rats before they raid your Timms, and ones that return for more, but it’s all gone. Just use a bit of apple in the traps. If you’re trapping feral cats, a site with a Timms and a rat trap might also be a good spot for kill traps (like a DOC 250) or a cage, because rat and possum carcasses can be used as bait. Checking 3 traps at one site will also be a time-save, because there will be fewer stops to make.

I hope this helps!

Yeah I’d say it would be rats too.

Setting up a trail camera or 2 will tell you.

Dear Jeff I have the same problem sometimes. I believe it might be birds. Could be blackbirds or even magpies. One trap caught a magpie the other day.
Could I ask you about the Flipping Timmy. Is it effective? Or is the normal Timms the way to go. My problem is that I have 70 A12 traps and Goodnature tells me they do not make them anymore. So I have to replace them but what? Thank you for help. Robert 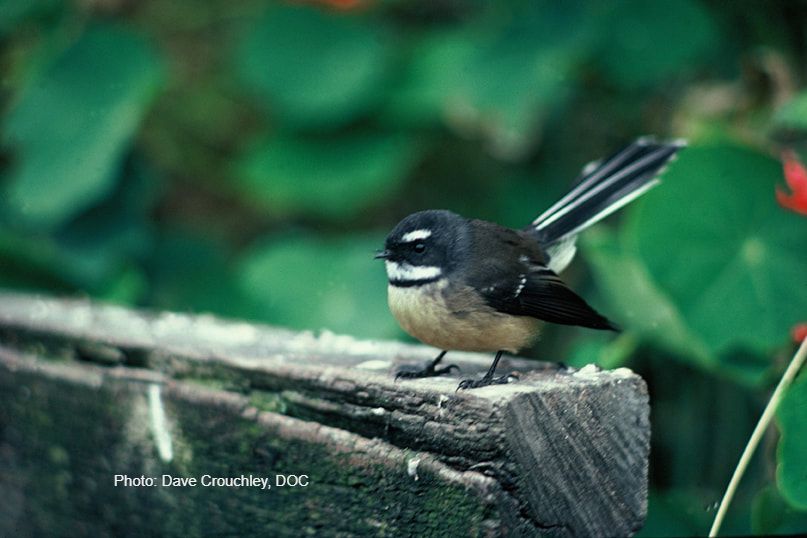 AIMS AND GOALS OF THE FANTAIL TRUST

I use three dates in a mini zip lock bag with cinnamon. Lasts ages and works well. Make sure and dispose of the bags properly and blaze the tree with flour lure.

We had the same problem. Only worked out what it was when we caught a rat in the Tipping Timmy. And I not sure that rats don’t like cinnamon. Our apple baits had cinnamon on them.

@Jeff_Marsh - another fiddly option is a piece of soft wire that holds the apple on, but I believe the others have identified your main culprit - the rat. Good luck with he suggested deterring options

@Quickenberry - don’t worry about the magpie being caught - one less bird to harass you when they are nesting!
ReA12 traps - while these are still working use them - you can get replacement gas canisters and even refill the bait dispensers (if you have the older bottle style)
Timms traps are not AWAC approved when they are installed on the ground - but on a tree they work well
Flipping Timmy when mounted on a tree or a ramp are also effective.
Don’t be afraid to mix the traps up in areas - I have a bait station beside a A12 - from Trail Camera footage - the bait station is more enticing than an A12 - 10:1.

You can also use a milk bottle top that you push through the trigger spike and fill with lure eg smoothy or flour icing suger or peanut butter. Swede is also a nice hard bait that can be fashioned into the right size and lured. You can alter the set tension by bending the trigger spike forward to fine the set also. Rats and birds can steal the apple but possums can also gently nibble them off too. But definately make sure the bait is not to large that the possum is not putting its head completely into the trap to access it. No matter what you do with ground set timms some possums will put their hand in and try and pull the apple out and you will get an escape. The flippy Timms that are set higher such that the possum has to hold onto the tree reduces this but you need to keep the flour blazing up to make them attractive. Flour icing suger blazing into the Timms and or spraying lure insides of Timms greatly improves their performance.

Do you think I am a bad person using Timms traps?

Do you put the zip lock bag in the trap? Do you pierce it do the possum can smell the dates? Keen to know because apple only lasts a few days in this warm weather

Corflute works really well, hence it is used for chew cards. It stops all but the smallest slugs stealing your lure as well:

Also an example of what eric007 mentioned, bait station and trap collocated: 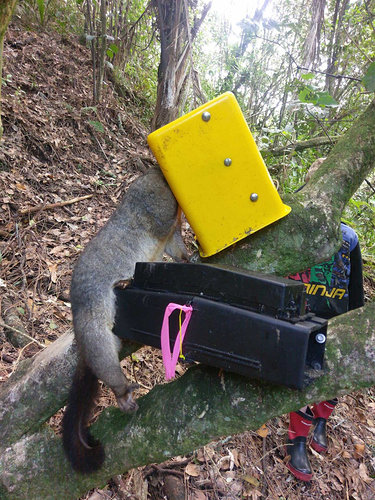 Just read this post, great suggestions here, been looking to change up my possum bait and didn’t realize cinnamon would be so effective as a deterrent to other critters nicking the bait. Cheers!

Update: Since I wrote that post, I’ve killed a large ship rat in one of my Timms, baited with a piece of cinnamon apple. So, clearly, I was wrong about rodents disliking cinnamon, but the level of attraction probably depends on how much cinnamon is used. It’s possible that the coating was on the light side that time. This was an overnight kill, so the apple was in peak condition, firm and crisp. A softer piece of apple might not have killed it.

Following the rat kill, when I have any pieces of cinnamon left over after baiting my Timms, I’ll skewer some apple in my DOC tunnels. It turns out it’s a pretty good lure in them, too. They’ll go moldy in winter, eventually, but the cinnamon coating delays this by a few days, and in warmer weather, the apple rots and ferments. Rats are fond of alcohol, so a whiff of it might be to their liking. A study that I read, found that rats preferred non-alcoholic beer to the real thing. They like the taste, smell, hydration, and calories, but if they drink enough, they get the same symptoms that humans do, like poor co-ordination.

I’ve bought some small glass jars with metal lids that I’m going to put some beer in, and drill small holes in the lids to allow the scent to disperse, while limiting the evaporation-rate, and prevent it being consumed by rodents and/or invertebrates. If it’s effective, it would be a good summer lure, with no worries about rotting or stolen bait inside warm traps. If enough rodents are interested in the beer, there will be plenty of visual and olfactory lures to make mustelids interested, and the smell of beer would be a curiosity.