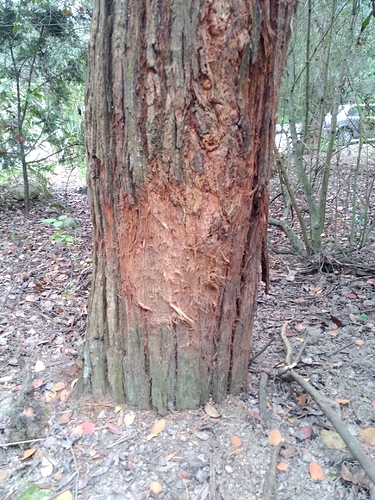 Hi we are trapping a 68 ha reserve on the town boundary of Timaru which about 80% is planted in natives and introduced species. In an area of native bush there are 5 mature silver dollar gum trees and these have been extensively clawed by possums. [see photo] We have not seen this on any other trees in the reserve and there are a number of other species of gum. We are catching at least 2 possums a week on a Tims trap by these trees. Has anyone else experienced this.

Wow, that’s some impressive clawing! I’ve never seen anything close to that.

At least you’re catching some of the bastards, so if there are traps in the surrounding area that aren’t catching many, you could temporarily (or permanently) place a trap at the base of each tree. Checking the traps more frequently would help, of course, but with 68ha to look after, I doubt that’s a realistic option.

Is there anybody that could give you a hand for a while? With a photo like that, you could try to get some more traps from the council and/or DOC, and contacting Forest & Bird couldn’t hurt, because you might find a few locals to help you check your traps (or do some hunting, if permitted). There might be some F&B members that haven’t been catching much lately that would lend you some traps. It can’t hurt to ask.

I wish I lived nearby, because I’d loan you 4 of my Timms. Best of luck.

There are 3 of us trapping and we have 25 traps a mixture of Goodnature Timms and Doc 200s.In 14 months we have trapped 175 possums,72 rats and 4 mustelids so we are hopefully making a difference. The scratchings are quite impressive aren’t they.

Maybe this is what you need 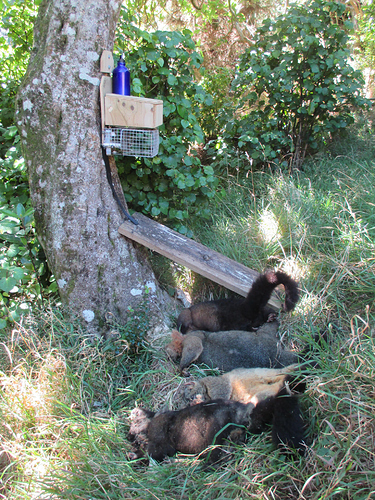 Very impressive. We are quite content with our kill rate but the point of the posting was the clawings on one variety of tree in a 68 ha reserve. We have seen nothing like it anywhere else and wondered if anyone else had seen something similar.

Mmmm
Since possums and silver dollar gums are both australian, perhaps the possums thought they were home.
What they don’t realise is that we all wish they were too…

The only problem with that theory is that are a number of other gum trees of various varieties in the Reserve and the possums are not attacking them. It is restricted to the silver dollar gums.

Well maybe they eat the silver dollar leaves but not other regular gum tree leaves?

Thinking about it, aren’t gum tree leaves poisonous? And koalas have developed some sort of tolerance to them?

But they aren’t eating the leaves they are clawing the trunks. And there are similar scratchings on all the silver dollar gums. And not just low down, Right up the trunks.

I’d be curious to see some trail cam footage of what they’re up to. Not sure why they’re going for those trees, but I reckon they do.