I caught my first rodent today. I thought it was a mouse due to it’s size, but my father thinks it’s a rat due to it’s tail. Here’s a photo. Which is it?

I’d go with rat. It’s quite big and the tail looks scaly rather than furry.
Ears look big which suggests a black rat vs Norway rat.
If the tail is longer than the body then that supports it being a black rat too. 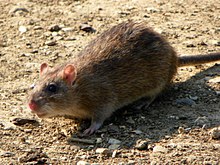 The brown rat (Rattus norvegicus), also known as the common rat, street rat, sewer rat, Hanover rat, Norway rat, Norwegian rat, Parisian rat, water rat, or wharf rat, is one of the best known and most common rats. One of the largest muroids, it is a brown or grey rodent with a head and body length of up to 28 cm (11 in) long, and a tail slightly shorter than that. It weighs between 140 and 500 g (4.9 and 17.6 oz). Thought to have originated in northern China, this rodent has now spread to all...

I sometimes struggle with juvenile rat vs mouse. I think baby rats have big paws compared to mice of similar size, and the tail looks more scaly.

Thanks. I updated my capture report to be a rat.