I am just wondering how exactly the trap nights are recorded. Some of our data in the corrected catch rate doesn’t appear to represent the number of nights the traps were actually set. Also is there anyway of manually editing this. 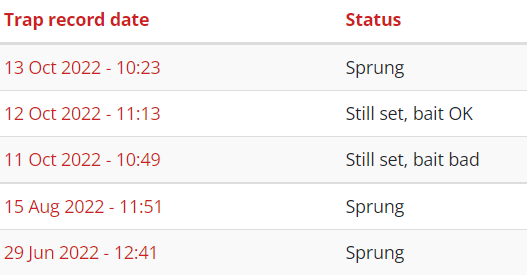 This trap is recording 57 trap nights, but I think it should only be recording 2

Kia ora @libbyhokonui Corrected trap catch rate is expressed as the catches per 100 trap nights. Trap nights is the number of nights the trap is set for over the period selected. However, when a trap is sprung the trap is assumed to be available for only half the nights from the previous trap record date.
That said if you have selected dates it will give you the trap nights and catch strikes.
Trap.nz have also created a new trap condition of disable to be able set the trap as available or not.
Here is the help doc on setting the new disable option Changing the trap cond... | Trap.NZ Help & User guides
I hope this helps

As Lenore says we are working on adding a Disabled trap state to allow this report to not count a trap as being active for a period. Currently a trap is considered active until it is officially retired, so in this particular case your trap is considered to be out and active from 29 June to 13 Oct.

Records that have a Sprung status are only “active” for the period until they sprung, and since there is no way to know when exactly that happened, it counts half the nights for that period.

You could try narrowing the date range you’re looking at in the report if you don’t want to look at the lifetime of the trap?