I think we need to start trapping predators smarter, setting traps 200 meters apart baiting with eggs or rabbit will catch some but not most.
Here are some of the things I do to better my chances of success with DOC traps.
I file the mesh on the entrance and tread plate guide so there are no sharp points. If a stoat is deciding whether or not to enter and he is poked by a sharp bit of wire he is not coming back.
I also wrap the entrance and tread plate guide with 2nd hand hemp bailing twine, mustelids love to run in to holes but it can be hard to see the hole in the wire mesh. I want them to see it a long way off.
Mustelids feel safe if they are under cover, so I attach a board to the top of the trap so the feel safe when they are looking at entering.
Hope this helps you to Trap Smarter. please share what you are doing we can all learn something new. 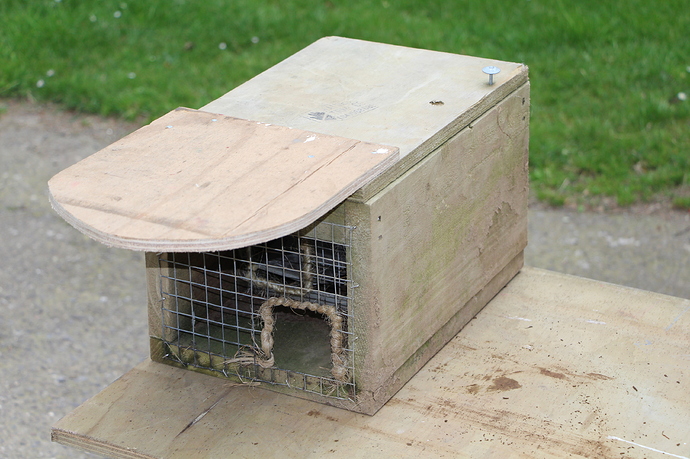 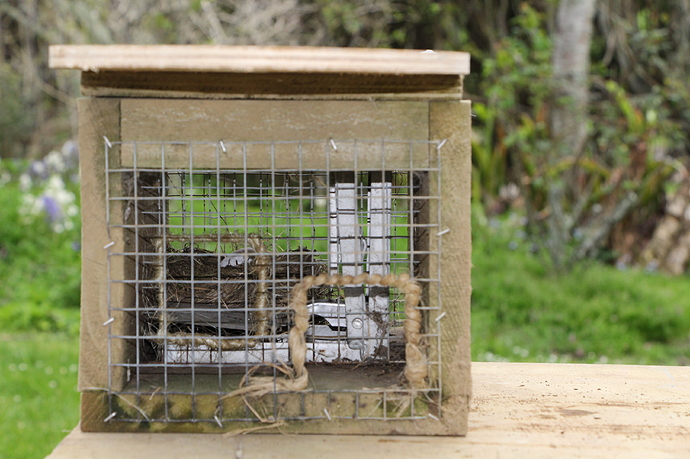 I agree there are things that can be done to lure some hesitant mustelids in. I also think some won’t go in regardless. I have filed down the sharp wires on my traps as I agree with you there. The bailing twine idea is interesting, so I may try that one out. I have cameras on some of my traps and it is interesting to watch their behaviour. I noticed ferrets are very quick to move and make decisions. They haven’t spent much time around my traps. I’ve only caught them with fresh rabbit so far. I’m not sold on the extra roofing idea yet as I’ve only seen them at night and they seem comfortable in the open at night. Probably a good idea for daytime though. Thanks for your tips.

Great stuff. Thanks for sharing.

I also find that some ferrets will walk around the back of the trap, look at the bait and move on. I wonder if they would be more curious if there was a covered tunnel entrance and they were encouraged to go into a tunnel to investigate the smell and get caught. I may modify a DOC250 when I get time. I’m curious why the DOC traps are open and tracking tunnels are closed. They’re both trying to lure the animal in, but they use different logic. Obviously one has the advantage of a lure. I had added twine around most of my traps as you suggested Copper_Dog, but it seems like a difficult time of year to catch them. I’m only seeing 1 ferret on camera about once every 2 weeks and sometimes a few days in a row, so perhaps a roving ferret or one with a large terrain.

I agree there are some predators that will be trap shy and not go in to a DOC style trap at all. I am sure the ferrets you are catching on camera that are refusing to enter have a reason. They might not like the bait or bait presentation they might not like the wood box. Its hard to tell but if you are catching refusals on camera how many other traps out there are missing catches. (including mine) We all need to try new things and share ideas to better our success rate, just because your trap is not catching doesn’t mean predators are not there. I would love to know if you block the back of the trap with plywood or brush if you catch your ferret.
Please keep sharing everyone

I just want to pass on some ideas that Hugh Eccles and his team are using at Waipahihi gardens - they might not be as common as I thought. The DOC200 traps in open boxes have a stout string attached to the swinging metal handle, on the top of the trap when it’s set. This passes through a hole in the trap side wall and is attached after another 30cm of rope to a cattle eartag with the trap number on it. You can see for metres away if the main trap is triggered, if the tag rests on top of the box normally but on triggering ends up close to the side of the box. We also install a mousetrap in most DOC200 sets, to reduce mouse pillage of the baits (this will use up more time until mouse numbers get reduced). Some other teams protect the peanut butter or other baits with mesh frames, using tea strainers or hair curlers with bait inside. For Victor and other rat trap sets in smaller boxes, Hugh ties leadline or similar to the trap’s swinging arm staple/rear and back to the external wall of the box, so you can drag the trap out gently without any effort. On all traps we try to mix up the baits sometimes, cheese should be a good option. We tried peanuts and small cat biscuits, not so good at first as the rats don’t seem to change their preferences easily. But you can throw this prefeed through the mesh of the traps. We also alternate with smooth peanut butter mixed with peanut oil, to make a liquid feed that can be pushed through the mesh and as prefeed in the entrance, using a squishy plastic bottle and nozzle. The same tube is also OK for rebaiting Victor traps without handling them. Get the bait down into the edges of the trigger so the rats/mice have to work hard to get it all. All the best.