Use of golf balls as a bait/lure

I was recently in Hanmer and noticed all the Doc200 traps used golf balls in them. Unfortunately I was unable to find someone to talk to as to how effective they were so now turning to trap.nz to see how people use them eg are they purely a visual lure and is another olfactory lure used in conjunction and secondly how effective are they ?

Have used them routinely although always in conjunction with an olfactory lure (usually fish oil on a ceramic lure and/or Erayze dehy rabbit). Can’t tell any difference from hens eggs. I have my doubts that real eggs are anything other than a visual attraction, especially once weathered when it’s likely that any residual natural odour will have gone.

I think the same thing about eggs being primarily visual lures. I also combine (fake) eggs with a variety of lures and baits. BTW, if you spray your Erayz with vinegar, it slows down the rate of mould-growth, and predators are vinegar fans, given the love of egg mayo.

I’d read about people using golf balls and ping pong balls, so I did some research in 2020, and found a company in Texas that makes life-like ceramic eggs for commercial farms to get hens laying. They made a shipping exception for me, since I’m involved in pest control, sending me a free sample. The husband of the woman running the business was once involved in bird conservation, which included pest control.

The manager of a conservation trust close to where I live, liked my idea for a study, and we’re about halfway through it to see if hens’ eggs and ceramic eggs makes any apparent difference. The eggs are being moved after 6 months to avoid site-bias.

If there isn’t a noticeable difference between the hens’ eggs and the ceramics, the trust will save a lot of money every year if they switch to them, because they operate thousands of traps. They aren’t expensive, by any means, even with the exchange-rate and the eye-watering cost of int’l shipping right now, it doesn’t take long before the ceramic eggs pay for themselves.

bottom line is that golf ball or any ball are the least effective bait. Rabbit fresh or salted is still the highest performing bait - not erayze

Hi rdf. As others have said, the golf balls are a visual lure only. Being white and egg-shaped, they are attractive to mustelids, rats and hedgehogs. If you wish to, you can buy plastic dummy eggs from Farmlands, which are pretty cheap ( they are used for encouraging broody ducks and hens) and use them in the same way. On the other hand, if you have a free supply of golf balls from living next to a course, you could use them and save the money.

Clean whatever you’re using every so often to remove the gunk that builds up in traps, so they stay nice and white. Also, if you put a blob of mayonnaise or other egg lure on them when you refresh the trap, that will enhance their appeal.

I read an NZ study that found Erayz to be approximately 80% as effective as fresh or salted rabbit.

Erayz is okay, but I wish it was dryer. In winter, it doesn’t very long to go mouldy. I’ve been spraying my meat baits with white vinegar. It’s been working really well to delay the speed with which mould starts to colonize it. I’ve been breaking kill records left and right this year, using quite a bit of vinegar, so it may make Erayz more attractive, too. Given how much predators like fresh egg mayo, I wouldn’t be surprised. It’s a cheap, easy technique, so I recommend giving it a go.

@willowflat_warrior Hey did you have a link to that study about Erayz?

We went to the $2 shop and bought plastic fake eggs and they work a treat!

Where Male stoats were found to have an acceptance rate of 88.9% for Erayz (V’s 100% for fresh Rabbit)

You can access the16 page document for yourself at this link. Look for the green “PDF” button to download a copy.

By the way - I’m beginning to curate a library of 100’s of documents like this for pest control and will post on these forums if it ever gets ready.

That isn’t the study I was referring to, unfortunately. I’ve spent hours trying to find the study that I referred to, but I’ve come up empty. The study was only comparing fresh rabbit, salted rabbit, and Erayz.

I recall the Discussion section, where the authors, both experienced trappers, concluded from their trials that Erayz was the best, most practical rabbit-based bait to use for large-scale conservation trapping, because its trapping-rate was on par with fresh and salted rabbit, it stays attractive to mustelids for a long time, and doesn’t rot, which is known to deter mustelids.

I’m pretty sure that they were DoC rangers, so they talking about checking large numbers of traps every 2-4 weeks. If you have a small number of traps that you can check frequently, and have a supply of fresh rabbit, then it should outperform salted or Erayz.

I’ll let you know if I happen to find it, but the odds are pretty low, I’m afraid.

Work done during the stoat program in about 2005 showed that because eggs are porus stoats could scent the contents of the egg.
regarding Erayz. In 2004 2005 I ran a 15month trial on salted rabbit, 220 double set traps, DOC northland ran a trial at the same time, but showed salted rabbit to be great. When Erayz came on the market I thought great I don’t have to chop up and salt rabbit anymore, unfortunatly the Erayz trial didn’t go well moldy soggy lures etc etc, caught 5 times as many rats as normal so it maybe a good rat lure but my stoat traps are for stoats not to get clogged up with rats. As for any argument that the rat might attract a stoat, stoats like fresh and rats go off fairly quick, after 20 years I have not seen any worthwhile link between dead rat in trap and catching a stoat 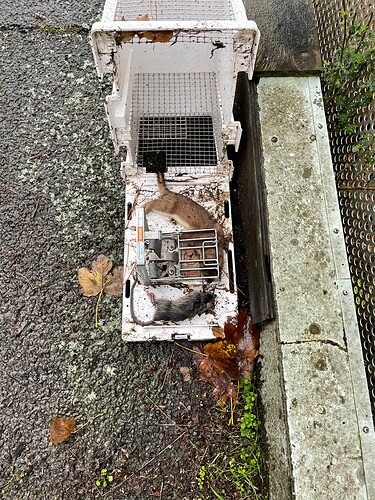 I’ve been using a block of beef fat that I bought at Pak 'N Save for about $8.

The downside is that it’s usually too brittle to skewer, and it makes gloves greasy. I’m using a pair of small tongs to handle it, now.

Have used them routinely although always in conjunction with an olfactory lure (usually fish oil on a ceramic lure and/or Erayze dehy rabbit). Can’t tell any difference from hens eggs. I have my doubts that real eggs are anything other than a visual attraction, especially once weathered when it’s likely that any residual natural odour will have gone.

Studies have shown that hens’ eggs are primarily effective as a visual lure. A lot of trappers use artificial eggs (golf balls, ping pong balls, plastic, ceramic) because there isn’t a noticeable difference between them and the real thing. I certainly haven’t noticed a difference, and it’s very hard to find white eggs these days. Punctured Hens eggs are, however, an effective short-lived lure for all predator species, so using them 3-4 times a year can’t hurt.

The problem with hens’ eggs, of course, is that they go rotten, and disposing of them is a nightmare, because they can explode when you handle them. In winter, though, they can last for a long time.

Golf balls aren’t cheap, but they can last for a very long time in tunnels. I have one that’s been damaged by UV, but it’s at least a decade old, and it went egg-shaped! Ping pong balls reportedly break down really quickly in full sun, so golf balls would be a better long-term investment.

I hope your traps are busy.

I have been using golf balls for a while. I have got on to golfers and get their old balls at no cost. Go to a golf club and ask, they often have a buck of old balls you can have some at no cost.

Great work! I’ve also trapped stoats with rats as lures, but it’s more convenient in winter, because they take longer to rot.