Hi all. This one in response to the recent query re apples being ratted from a kill trap. It’s a long post so figured it best to start a new topic. This is a post I just added to a new Facebook group, Trapping Outside the Box NZ. If your interested in sharing innovative trapping ideas and of a mind to experiment please come and join us.

On Oct 13th, 14 Steve Allen SA2 traps were baited with a single, Value brand, dried apricot. All remnants of previous baits were removed. On Oct 14th, 2 more apricots were added to each trap so each had three cots on the bait screw. 3 possums were removed. Oct 18th, 4 possums were removed. At the same time, cyanide was added to prefeed pots along the same ridge. The next day, 3 possums were removed from the SA’s and 12 cyanide kills were tallied. Oct 22nd, 1 in SA with 5 more cyanide. There had been a few days of steady rain and the apricots had swelled to double size but all traps, except one, still had the 3 cots added 8 nights previous. Oct 27th, 2 more even though cots in some traps were showing some mould spots. Not done yet though, 2 more Nov 2nd. A total of 15 possums over 19 nights from the Oct 14th baiting. Lures in SA’s are accessible to rats from the opening in the top of the trap. The traps in this test were screened on top to ensure that a possum couldn’t reach in and claw a bait loose. Easy for a rat to avoid the trigger of an SA though, especially if the bait is pushed all the way along the screw up against the trap wall.

That was our official trial of the Value brand dried apricot, but not the record for being a long lasting effective lure. A single SA in another area caught a mama, and her hairless kit told just how fresh she was. That single apricot still worked after 25 days. It had been nibbled on, I assume by a rat, and was starting to show mould spots. Being out of baits at the time I checked a nearby Trapinator, previously baited at the same time. It’s apricot was untouched, and with it’s dry location, was not showing mould.

More to be told though. We discovered that rats do not find all dried apricots to be best left alone. As a result of the success of the initial trial we purchased a 10 kg box from Bin Inn. We didn’t realize there could be such a difference in dried apricot quality between brands. I rate the Bin Inn apricots at ten of ten, the Value brand two of ten. Single, Bin Inn cots, in SA’s have attracted and trapped eleven rats. They do go missing in others. But it’s an apple and oranges comparison between the sweet, juicy cots and the much drier ones that I assume do cause rats to choke as the online warning to pet rat owners states.

The Value brand cots show a sugar content of 53 grams / 100. I have not been able to find the sugar content of the Bin Inn brand. Have tried a
Tasti brand as well. Their sugar content shows as 65/100. Taste wise they are less sweet than Bin Inn but they disappear from traps too. Have yet to try a Countdown product, Sunreal brand, that shows the lowest sugar at 46/100. Again though I suspect that the reason the Value brand is shunned is because rats are physically unable to swallow them. Yet to be determined if that is true of other brands.

Hope you will give the Value brand a try in your possum kill trap and share the results. 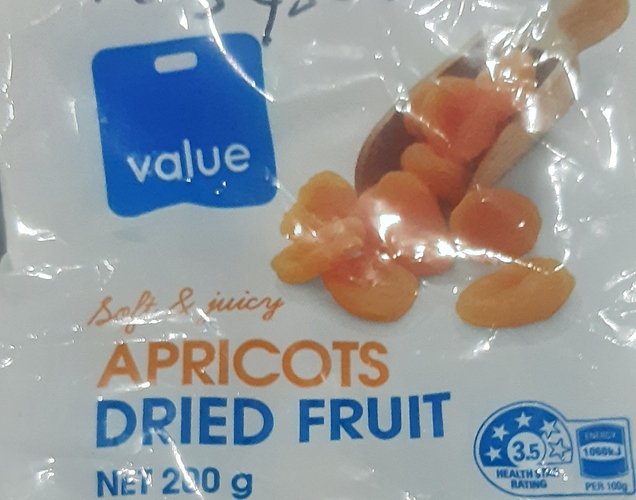 Another lure I heard that possums like but rats don’t is apple-scented shampoo! Haven’t tried that myself though.

Great idea Ron, I will give that a go. Yes I don’t mind if Rats Take the bait and get caught, but the ones that eat or lick the bait and then get away.

I have joined your FB group as well…Gary

I have bought some Value apricots today - Ron - have you found that your possums prefer these apricots to apples/cinnamon, or are they just easier to use? I guess I will eat them if the possums don’t like them.

BTW this product contains a mould-inhibiting preservate (220 which is a sulphite preservative).

We were using apple cinnamon as well but have switched to the cots. They are easier to use and nothing to make me think they are any less preferred. They are firm enough to stand both a bite and a triggering tug. They last longer re mould and yes that could be due in part to the sulfur dioxide. My initial trial had three in each SA2 but one would be sufficient. There was only one cot on the first night and three of fourteen traps were successful. That in spite of pre bait for cyanide being available along the same line.

I did chance upon two mice, in the daylight, chowing down on one of the Bin Inn cots.

You’d need a camera trap to prove the %, but I suspect that most of the time it’s mice that steal the bait out of your rat traps. When I tried stuffing some firm bait into the cups in my T-Rex traps, I trapped mouse-after-mouse that couldn’t just lick everything up. When they had to use their paws to try and pull with their teeth or paws, they moved enough to set off the trap. Once the mice were taken care of, I started to trap rats again.

I used Erayz preserved rabbit, cut to size, and crammed in some black liquorice. Firm cheese would probably work, too.

Did you try the Goodnature lures, yet?

Rats are more likely to eat the cots when they’re moist, because they’ll be a lot easier to chew, and they’ll have a nicer scent that will travel farther. The Value brand should be the best cots to use because of their texture, which ensures that a possum will have to give it a good pull. I would expect you to find a lot more bait-less traps if high-quality cots were used as bait, due to rodent consumption, and possums eating them without setting off the trap. Possums aren’t known to be fussy animals, so buying high-quality ones for bait might be a waste of money and good fruit.

Are you using visual lures? Flour blazes are commonly-used to get possums’ attention, and a study found that they are very attracted to luminescent light (glow-in-the-dark). You could attach a GloTag to your traps to see if they increase interaction-rates. I only have a few Timms running for possums, so I can’t find out if they make a difference, but you have enough running to gather a decent amount of data. I’m not aware of a trapping experiment in NZ trialling luminescent lures, so your data could be valuable. If your results are good, a large study might be conducted.
Luminescent Glo Tags - Traps.co.nz Online Store

Keep up the good work!