What is the best Stoat Bait

I have been trapping possums for years, but Stoats are new for me.

I have a couple of DOC 200 traps and have tried eggs (No luck), and now are trying Sardines in Olive Oil. I will check traps today.

Just wondering what have you found gave your trapping the best results?

Hi Gary, field research tells me eggs won’t work as good as rabbit meat (salted). Only as a lure. They won’t eat it because it is salty.

Stoats are attracted to rats. If you remove the dead rat in a trap and set it again they come back to check it out again. Sometimes they eat a bit of the dead rat in the trap. Some told me to smear the trap with its bum of a rat or a stoat, so they smell the scent. I never did that but might try this in the future. The trap position is of major importance, close to a waterway.

Thanks for the advice, where do you get salted Rabbit?

I understood stoats are not fans of water? At the moment its on a fence line that borders a field which I suspect has rabbits.

I skinned a rabbit myself and salted it. Volunteers shoot rabbits in our area, so I was able to get a hold of two. You can try the stoat bait blocks. They have rabbit in them, or catch a rabbit yourself. I have the bits in my freezer. 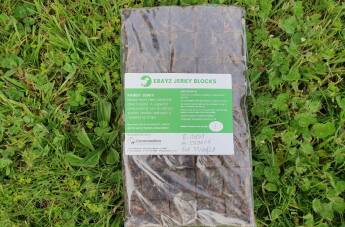 I never used the blocks, but you can give it a go and see if it works for you. I think stoats check out the water edges in search for rats and birds. If you don’t have water no worries, I heard they travel 7 km a day to get their prey. My trap was positioned 30 m from the water edge and it didn’t catch anything. After moving it 3 meters from the water edge I caught 2 stoats in one month.

I will give that a go, we are in the Waitakere, so water isn’t an issue

I wonder if Possums would work, we catch tons of the them.

I tried possums to. I didn’t catch any stoats with salted possums. In the list of baits for stoats I never see possum. But who knows. I also tried pig liver… I think they are attracted to the scent and go for it. Maybe possum and pig liver smells like something unknown to them and therefore is not enough incentive to check out your trap. Try it out and see how it goes. Maybe there were no stoats around at the time of baiting. Good luck.

Thanks, I found these for sale.

Looks like Rabbit Jerky, I wonder if anyone has had luck with these? 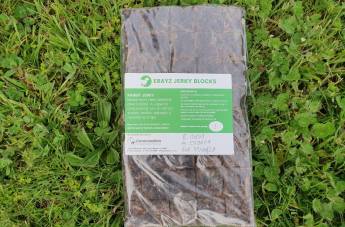 Hi Gary, good advice from CTM,
Also, some projects have found salted possum works almost as well as salted rabbit, when rabbits are in short supply. Eggs for winter/spring as a visual lure and when birds start to lay eggs in their nests. Good luck.

Fresh rabbit works well for me, but has limited life in the field before the maggots get into it! I’ve also used cooked chicken scraps (Norway rats love this too). Maybe trap entrances inviting and I tend to expand the first entrance one square wider, but may depend on your by-catch situation. I’ve seen ferrets poke their head into a DOC250 and decide perhaps it is too tight/risky and back away. Good luck! 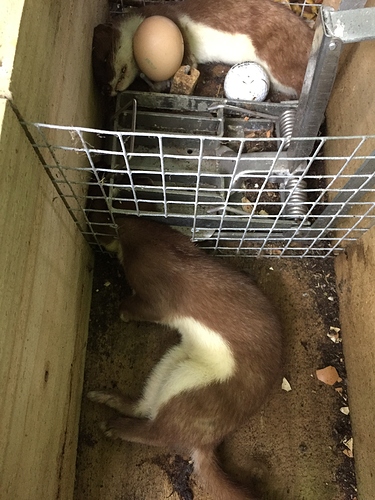 23dec20 Stoat B2448×3264 1.65 MB
And then if you finally catch one, make the best use of it! I had the egg (and golf ball) and mustelid cube as bait and was taken by surprise to see the first stoat on 22dec. Popped it back in the trap as had been recommended by a local trapper and bingo! The next night. This has worked for three of our group in the last few weeks. Good luck. (This was in a road reserve between two lots of farm paddocks - no waterway nearby, just a bit of lying water in the drains.)
2 Likes
kiwigary January 3, 2021, 7:55pm #13

Ha Ha love that Golf ball idea, I keep finding them in the bush. Maybe that is why?

I wonder if a dead rat would attract them as well, but I’m guessing these have a limited time span?

The golf balls are said to be a good (and longlasting!) alternative to eggs as a visual attraction in conjunction with the Erayz or mustelid cubes that smell good. One of our group found a half-chewed rat in a doc trap so put it back in as lure - caught a stoat that night, put the stoat in as lure and caught a second stoat that night. So yes, both seem good options but neither last long once the flies find them! 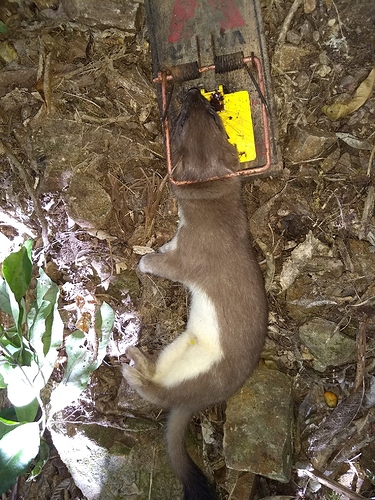 As unlikely as it sounds I caught this stoat yesterday with tunnel/Victor trap baited with Nutella.

Meanwhile my stoat traps baited with eggs haven’t caught anything in 18 months.

The stoat would have been attracted to the smell of rat on the trap not the Nutella.

Thanks everyone. Yes I suspect it may have been the smell of previous rat catches, and I am moving to other baits than eggs. 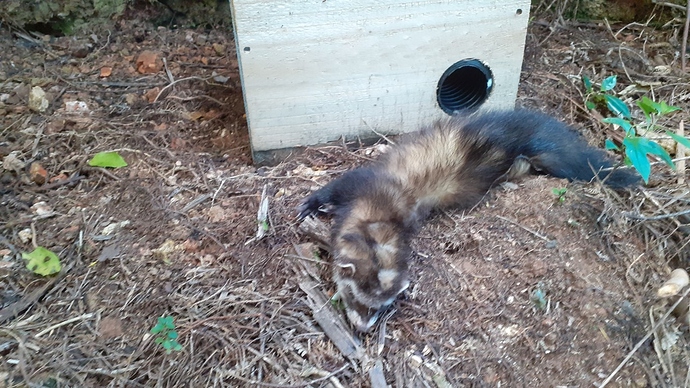 @kiwigary Nice catch! Where are you based?