On a number of occasions (not every time) I have gone to clear a trapinator trap and found large piles of possum fur under the catch. I don’t think its rats as the fur looks like its been clawed off. There are no puncture wounds or tears in the flesh. I was wondering if this could be cats trying to pull it out of the trap? We have a few wild ones about. Any suggestions? Anyone had similar? Cheers

This is usually caused by other possums clawing at the carcass. They are trying to either mate with it or pull it.

Reset your trap and you will probably catch it.

Hi, Yes I agree likely to be another possum. In my experience cats will eat the carcass rather than scratch at it, starting from the belly as they go for the liver first.
Cheers,
Pat

Well I would never have figured that! Makes sense as there is only the fur disturbed. Thanks for the heads up Bevan. I have reset my trap, will see if I catch that one too.
Cheers, Bevan (Bevanz71)

Thanks Pat, we have a few wild cats lurking, but what you and Bevan have said now makes sense.
I thought maybe a cat would have a go at trying to remove it out of the trap, hence the shredding but your advice about how a cat would approach a carcass has also dispelled that theory. Cheers for sharing that,
Bevan

This video should help clear that up

Yeah, we get 1 new one every week or 2. They keep coming! We’ve on an avocado orchard, so plenty of trees to hide in and food to eat. I find shooting more effective than trapping or baiting.

That is quite incredible footage, all is revealed! Thanks for sharing. What did you use to record it with? Awesome quality! Cheers Cam

This video should help clear that up

Thanks for the video Cam … was it trying to get the first one out of the trap?

Great footage and info - cheers for that.

Bascally just fighting the other male. He chewed the upper legs of the trapped possum and I guess just asserting his dominance (over a dead male possum in his territory!)

Thanks Cam. As a matter of interest were you doing some research on which traps and/or lures were most popular? I do similar things, but am suffering from a severe lack of possums here since the last OSPRI project about 18 months ago! cheers

I like to monitor the behaviour of predators around traps with different baits. I’m periodically predator free here, but they keep coming in from the neighbouring properties. There is less motivation to bait traps when you don’t see anything for weeks and then when you do, you wish you have fresh lure int he traps! I need to help trap neighbouring properties when I get more time as there is limited interest from most people as long as numbers are low.

Yep, they like to cuddle, one of my Trapinators a few weeks ago 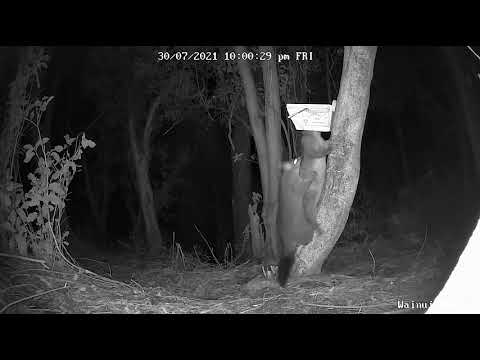 What camera is that Cam?

Yep, same as Cam, but I’ve got it on SD card in burst shot mode. Got one in a flipping timmy the other night & it’s mother came back 5 times to try to drag it out. Caught mom 2 nights later complete with joey in pouch.
Think I’ve mentioned this before but maybe not on this forum. My improved peanut butter recipe. Get a standard 330g jar of smooth peanut butter & stir in 15 crushed chewable vitamin C tablets. It lasts twice a long in our rather damp environment & the possums, rats, mice & hedgehogs love it (even the chaffinches sneak into my Doc200 traps to eat it without tripping the trap).
Cheers,
Ron