Some records not syncing from phone application

As title says, occasionally a record or 2 doesn’t sync properly once I’m back in cell reception. If I check the project log in the app, it has the small cloud symbol next to the record that hasn’t synced. Tapping on the cloud seems like it doesn’t change anything.
Anyone have a fix? Other than manually checking the log for this problem and manually entering it into the system again? 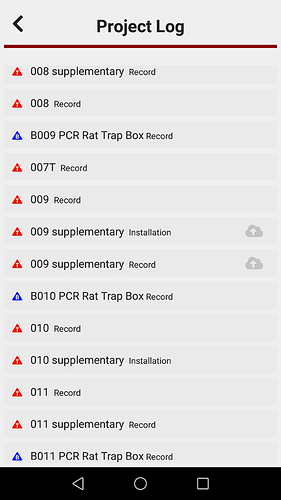 I just had a similar issue.
I went out and checked all the traps, recorded everything, then got back home, connected to the home network, and all the log records were there, but the app said I was not online, and the records were not syncing.
I spent about 15 minutes trying to get it to sync - no joy.
I force stopped the app, restarted it, and now there are no records of today’s trapping.
Can we get a feature that saves a txt log to the phone, so that at least I can get the data if the app crashes.
A text file log for each day would be great.
Right now - I am superbly P’d off - a bad end to an atrocious week!

Just had the same issue you had Ted, lost about half of today’s bait station records

Makes it a pretty unreliable way to record data

Yes apologies, we had an issue with record syncing in marginal network coverage particularly exacerbated when added images. The fix for that introduced the problem you experienced (it also hit us on our project so we felt the pain too.) It was isolated to v3.1.12 and has been resolved in v3.2.4

Ted, we like the idea of the local record which is outside of the app, we’ll work on something of that nature for a future release.

Hi, just had same problem today. Using the 3.2.4 version. In order to log info using the app, do I ned to be listed as editor? I am member administrator for the group. Should I be able to record info using the app? Thanks Robyn.

As an administrator you can do everything, editor status won’t give you any more rights.

If you can give us some details on what failed and when (a screenshot of the failed record would suffice) then we can take a look.

Hi Andy, I am currently using phones with no SIM, so no mobile network. Trapping records from the 29th uploaded no issue as soon as the wifi network was in range. However records from the 30th have not, and tapping the synchronise option on the log does not appear to force upload. We are using Samsung J2 phones and trap.nz v3.2.4. Are we best to aquire some burner sim with data, or will it be possible for a force upload to be made in the near future? Cheers, Amy

I’m having a very similar issue. Records for trap checks on certain traps just won’t upload regardless of coverage and won’t synchronise when going through the project log synchronise option even when connected to wifi. Please find the screenshot attached.

Correct. Thanks for the update.

Hi Andy & Pest-tech. Funny enough the issue has reappeared? Just back from off-the-grid fieldwork and was surprised that my trap records didn’t sync. All the traps in the project log are red. Tapping the cloud symbol causes the App to crash. Using version 4.1.3 at the moment. Any suggestions?

Could you try logging out, closing the app, then opening it and logging back in? Your logs should still be there, though if you want to play it safe, note them down in case they do disappear.

Failing that, definitely make a record of your logs, then reset the app Menu > Settings > Advanced > RESET APP.

If you’re still having issues after trying that, please email me at support@trap.nz

I can confirm that the problem still exists in version 4.1.3. Tapping the synchronise button terminates the app.

Thanks everyone. We’ll take a look at this one asap.

Hi Andy, I’m having the same problem on the my Iphone. Out of the bush yesterday and data wont sync. The other party member used Android and their data synced OK. Like the others, I can see the records in the log but when I hit the sync button it throws me out of the app.

Thanks for the heads up. Can I ask how long you had the app offline for?

It is a frustrating edge case where the automatic retry period expires, after which it reverts to the manual resend button (which is broken in that release.) Not many people are offline for extended periods and I think this is where the bug comes to a head.

Annoyingly there isn’t an easy way to ‘resend’ the data with that button broken. For that run you’ll have to treat the log as a notebook and re-enter the data (either in the app or on website.)

We found the bug and it is already fixed pending release.

Again thanks for letting us know !

Thanks Andy for your quick response and great to hear this is being resolved. I have manually extracted info from log as suggested.
My app continued to log me out everytime I left it and then took a long time to reload. I have deleted the app and reloaded it and now it appears to be working OK again. Be good if these bugs can be sorted. Overall the app appears to be much more stable offline than it was, I havent had it crash in the field for some time.

Another issue that could catch people out is that the GPS location often freezes and shows you at a previous position, pushing the GPS button doesnt resolve this when it is frozen, my work around on my iphone is to close the app (not log off) and reopen then it quickly relocates your actual position. Be good if this could be sorted eventually.

Also, I understand you are working on a filter for different trap types? If so this will be helpful as I have both A24s and DOC 200s and it can get cluttered.

Hi Andy,
Perhaps the extended period of time in the field without network coverage explains why all 122 records just disappeared in the process of synchronising the data at the end of a run? Maybe sync’ing the app half way through that run would be safer. Such a bummer!

That is disappointing. Android or iPhone?